Hugs For the Houseless Poetry Mural 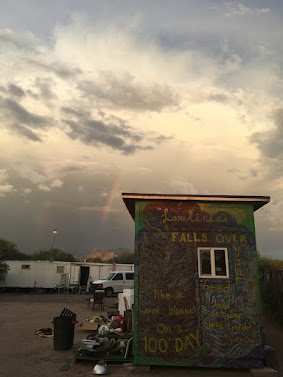 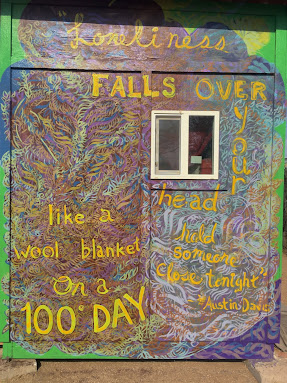 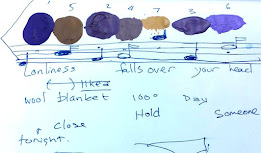 The artists talked about the relationship of Jazz to Colors and poetry, and how that could drive the project. They selected one of Austin’s poems, then discussed what music came to mind as we read this poem? Austin suggested:

While listening to the works Michael set about mixing a series of harmonious, moody colors. Paints and color in this case were used to emphasize the poem. Each letter became a figure. Each word  and line of the poem carefully placed. Then the layers of color. What a great addition to the murals at VRM! 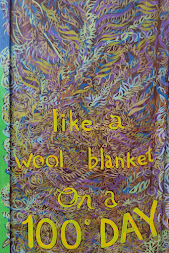 Austin is the author of "The World Isn’t the Size of Our Neighborhood Anymore" (Weasel Press, 2020) and "Celestial Night Light" (Ghost City Press, 2020).

You can read more about Austin and his work here: 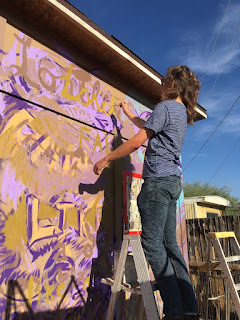 Posted by MBSarts at 1:16 AM No comments:

These are some preview samples from my current body of works, to be exhibited this fall.

From the artists journal:

“These figurative works are narrative observation/intuition based. They rely on this idea of the artist as a vessel by which intuition is transferred as a mark to a surface, while telling a story. The structure is preexisting. In this sense the archetype becomes a historical bookmark of sorts, the topical space environment surrounding these paintings are as important as the works themselves.” 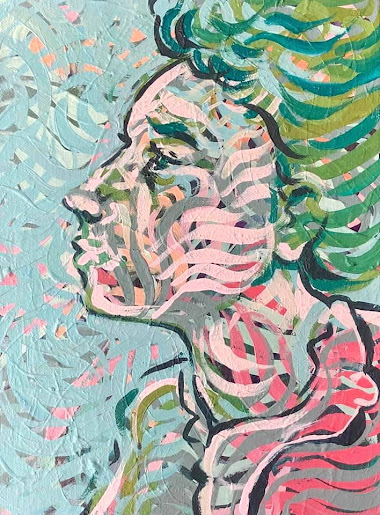 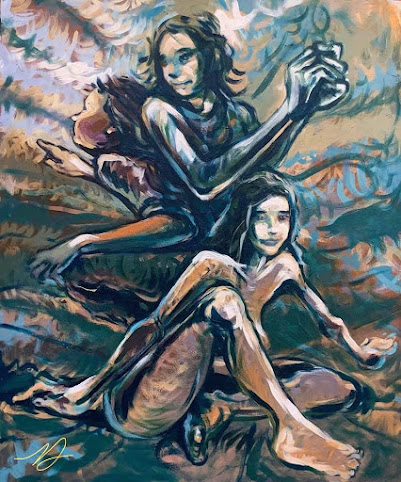 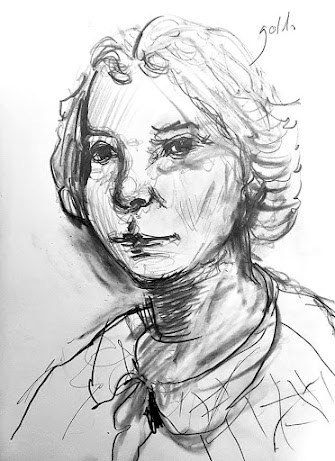 (* Original work available for advanced purchase. They will be included in the fall exhibit, after which shipping will be expedited. All works ©2021 Michael B Schwartz/ MBSArts LLC)

Posted by MBSarts at 8:08 PM No comments: 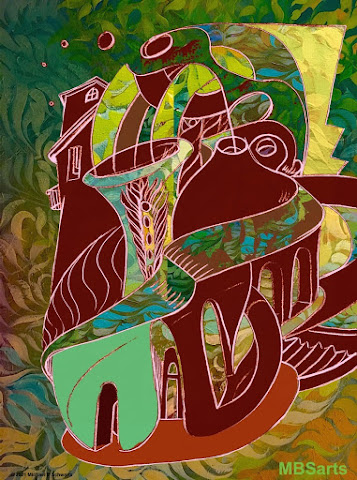 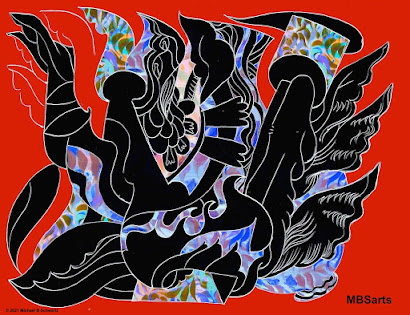 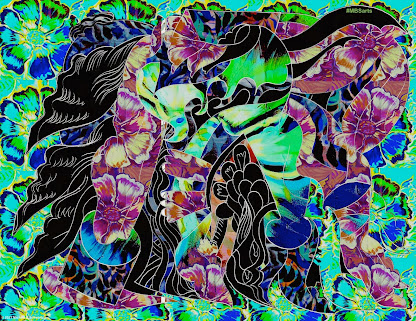 I’ve been doing this series of drawings and digital collages for some time. The end product can be a just about anything I can print or project on. I have mixed feelings about this. As a painter I’ve always felt that the direct tactile experience with a work of art is essential. I had to ask myself, can I duplicate this experience digitally? Can this experience of a painting talking to directly to the viewer be translated into digital format?

The answers I suppose are self evident - as we learn to see light through these screens - the experience, while fleeting, can be profound. We can’t touch the textures, or taste the smells but we can imagine - we can be transported for a moment.

In that spirit I have been creating dozens of these digital collages. They go well with the sound of Jazz music.

Let me know what you think, I hope they lighten up your day!

(Yes, these image are also available in print form, contact me for pricing.)

Posted by MBSarts at 6:33 PM No comments:

I’m honored to be on the current cover of LaLapid Magazine, The Society for Crypto Judaic Studies. You can sign up for membership and learn more here. 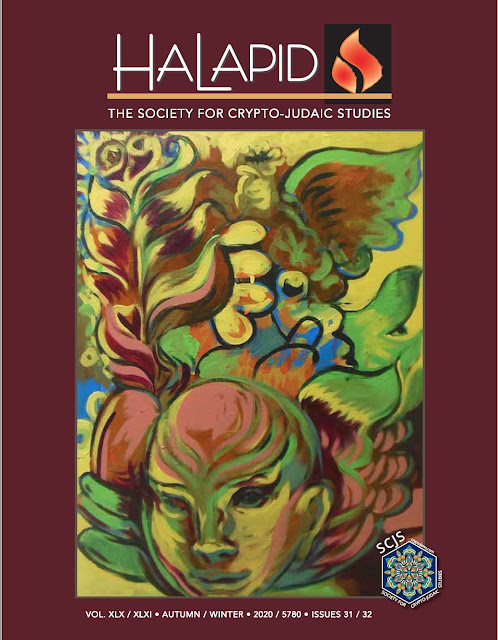 "Astrolabes"Acrylic on Canvas 30” x 48”,  is featured in an on-line exhibit

Posted by MBSarts at 6:24 PM No comments:

Over the past several years I’ve been volunteering as as Artist in Residence (AIR) with Veterans Rescue Mission, a mini house village dedicated to getting vets the services to which they are entitled. The site is dedicated to transitional living, with several full time stewards on the acre campus. It’s a fun project, no expectations, the participants drive the process. We had been working on murals, gardens, shade structures and exhibits prior to “COVID 19”. 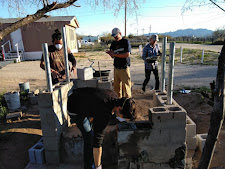 Throughout the past year colleagues and I have struggled with the most effective ways to adapt our community art making practices amidst this pandemic. We have utilized new platforms, podcasts, Zoom, emails, calls and texts. For a few weeks it was safe to meet in person, that ended quickly and it was right back to Zoom. Recently our weekly sessions added artist presentations, time for journal reflection and a new mural class. 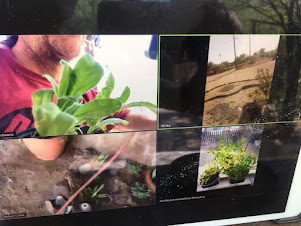 Our earth day session included time for house plants to socialize over Zoom. 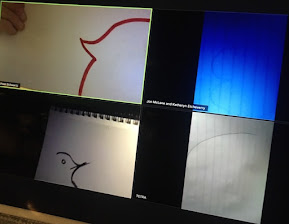 Participants are doing individual projects in our houses and places of work. We are creating things and offering services vital to our community. The general unifying theme seems to revolve around this idea of adaptation- developing systems of support, for our hearts, bodies, minds and souls. There is a strong awareness of the impacts of climate change.

The change to on-line has been awkward for everyone. Community arts practice is often about spontaneity, new ideas emerge from discussions while working together, poetry being read, food  served -  that dynamic buzz of excitement.

As participants described their lives and needs we came up with the idea of art deliveries. The first round of Emergency Art-Aid kits was delivered with contributions of seeds, plant starters, art supplies and tools. We all depend on these systems, networks for production and distribution of goods and services. This idea of transit, of making, then moving objects from one place to another has revealed abundance. There are gardens, seeds, a thrift store, teachers, weavers, builders, neighbors and networks. 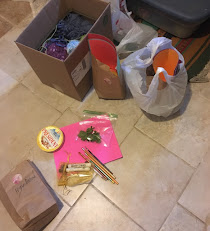 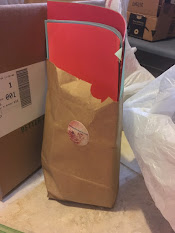 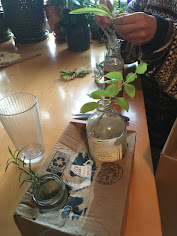 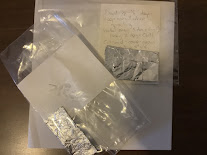 As I drove about delivering kits I thought of my voyage as wing akin to connecting the meridians of our city, a network of veins or rivers, a life force being animated. As we engage this system the kinesthetic excitement of collaboration produces an energy wave. We can measure that wave, observe and then re-engage it. This process of adaptation amidst uncertainty and grief is producing innovation.

We have been asking some framing questions.

In the weeks and months to come, we will find out. Slowly, as a community of makers and learners we are figuring this out together. 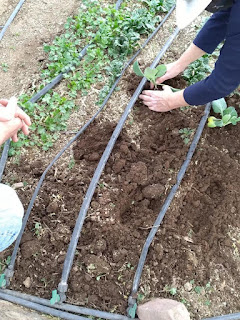 Workshops are every Wed. 4pm. To register, or if you have questions contact me through my website here: www.MichaelBSchwartz.com

Posted by MBSarts at 5:39 PM No comments:

There is a large, colorful mural on the wall of S&K Market in the Miracle Manor neighborhood. It is a 10-year-old iconic mural with various representative images of the rich history of this small niche in Ward 3. But more than a mural, it was a seed that helped launch Tucson’s mural movement over the recent years.
“This mural...initiated the city-wide mural movement. When we started almost nobody wanted murals,” said Michael Schwartz, the mural artist whose name is painted in the lower left corner on the north-facing wall of the market at 2520 N. 15th Ave. But really, he added, the mural’s creators were many people, young and old, from the neighborhood. The mural emerged from an extensive intergenerational, after-school series of workshops and interviews.
“People voted on every single element in that mural. The neighbors literally cast ballots,” he said. “I acted as the lead artist and painted their mural.”
At the core of the mural is more than paint on a brick wall. It is about community engagement and cultural development, and building community identity in the neighborhood bounded by Miracle Mile on the north, Grant Road on the south, Oracle on the east and Fairview on the west.
The mural project began in early September 2009. It was one of five demonstration art projects sponsored by the Tucson Arts Brigade. The Miracle Manor Neighborhood Association proposed the mural and it was developed and created in collaboration with the Youth Empowerment Services Network. It was completed in April 2010.

The images in the mural include the sign for the Ghost Ranch and Lodge Restaurant, whose sign was designed by artist Georgia O’Keefe and El Rey, both which represent the smattering of small motor lodges that had sprung up on Miracle Mile and Oracle Road, the northern entrance to Tucson, before the coming of the freeway. There is John Wayne on the big screen of the now-gone Biltmore/Miracle Mile Drive-in theater and E. C. Nash Elementary School, opened in 1960 and named after the first superintendent of the Amphitheater School District. And there is a neighbor looking out from her window admiring the birds, a rabbit, oranges on a tree, flowers. The image is reflective of the area’s early rural character. The mural is topped off with fluffy bunny-shaped clouds soaring above purple mountains and a radiating sky.
"Back in the late 1940s and early '50s when the neighborhood was being developed, residents who still lived here from that time offered up information for the history of the neighborhood," said Marsha Quinn, in a story in the Arizona Daily Star, published on Oct. 22, 2012. Quinn, a neighborhood resident who was involved in the mural project, added, "We really wanted to have the mural be meaningful to the neighborhood, and the seniors really had a lot of input."
Some of those neighbors involved in the project were Henry and Alicia Garcia, Sandi Mittelstaedt, Mickey Ethington, Dee Brunner, Gene Dickens, Mario Gonzalez, Oscar Bojorquez, Kathy Johnson, according to the Daily Star story.
The project’s history and creation is collected in this internet site. For Chankiry Chhang, owner of the S&K Market for the past 17 years, the mural has been nothing but positive.
“It was better than a blank wall,” he said as he admired the mural Thursday afternoon. He has had no problems with graffiti on the mural. He said that people from outside the neighborhood come to the store to admire it and take photos of the mural. “Everybody comes,” he said. “It makes me feel proud.”
Posted by MBSarts at 2:15 PM No comments:

What ever hapened to Tucson Arts Brigade?