On Friday, February 5, 2016, the City of Tucson Environmental Services Department will unveil and begin delivery of five metal trash containers that have been painted with murals as part of an effort to reduce graffiti.  Environmental Services contracted with the Tucson Arts Brigade to coordinate the project. Additional funding was provided by the Graffiti Resource Council in Washington, DC.


Five Tucson artists have designed and painted the trash containers which will be provided to businesses that have a high potential for graffiti and tagging. The City, working with the Tucson Arts Brigade hopes the program will also improve urban aesthetics and ultimately save taxpayers money on graffiti abatement.

Five artists were selected from 44 applicants who ranged from established painters to first-time muralists. The artists are Johanna Hand, Sasha Lewis, Niki Glen, Porter McDonald and Ruben Moreno. The city provided $5,000 in funding for the pilot program, which was matched by the Graffiti Resource Council, a Washington, D.C.-based nonprofit vandalism prevention organization.
Tucson City Councilman Steve Kozachik said, “City leaders have been working on this program for quite some time. Even though such initiatives may not end the exorbitant cost of graffiti abatement, they can potentially help save money as well as beautify the city.”

We are combining our annual MLK Day celebrations with the USDAC Peoples State of the Union. We the people, tell our stories of social justice, creativity and metamorphosis. Share a song, dance, poem, story or work of art, or just listen. 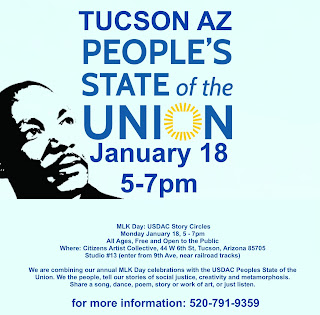 Posted by MBSarts Lab at 4:53 PM No comments: