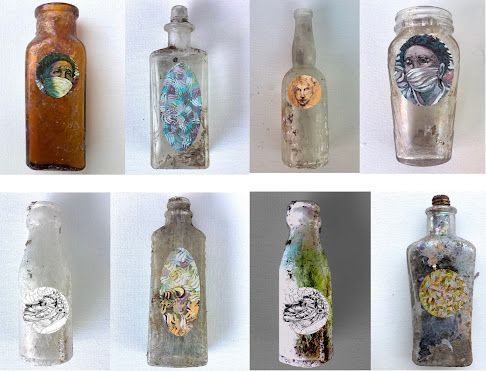 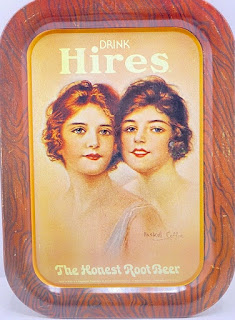 One of the discoveries in the Art-Ology project was a 1930’s Hires Root Beer Syrup bottle. This was among various materials indicating a possible barber shop at this site.

This little bottle sold for .25 cents and made five gallons of delicious root beer. It came in a catchy package, and one could go further by collecting various types of bling associated with the product. Most popular among these were the finely printed lithographic Victorian  Trade  Cards which circulated from 1883-1910.

In addition to storage and production areas, his factory on Arch Street in Philadelphia included large mail order and printing areas. There is a ton written about the company, its marketing and advertising approach still having a significant impact.

The term “beer” was not popular among the more conservative members of the  Philadelphia Temperance movement. It’s reported that the founder of Temple University, Rev.  Dr.  Russell Conwell, had asked Mr. Hires to “create a beverage that might be sold among hard drinking Pennsylvania miners, in  the interest of the (Temperance) Movement.”

Perhaps Mr. Hires knew how to appease those who might otherwise come bearing axes. He certainly had something much more grand in mind. His root beer formula was said to have healing qualities. He desired to create “a home-made root beer, such as our forefathers used in “ye olden time.” This mixture of of wild roots, berries, including, pipsissewa, spikenard, juniper, wintergreen, sarsaparilla, and hops was almost certainly a First Nations recipe, passed on through the generations as “root tea”. He managed to adapt this formula into a mass produced GMO free 100% organic syrup.

What stands out was the system of organization that seems to mirror an artistic practice. He had areas in his factory for; Communication, Storage, Production, Distribution, Packaging and Planning. 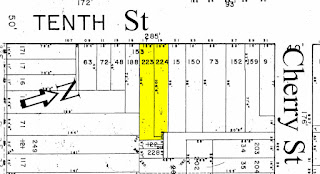 The root beer syrup bottles discovered here, in Southern Arizona, were mixed into five gallons of something nutritious and delicious. We can practically hear the ice cubes being added to cups and the drink slowly poured for guests while waiting in the Arizona room for their hair to be cut, listening to the latest news and gossip. These were the days before air conditioning, when electric fans and chunks of ice, delivered by rail a few blocks away, had to do the trick.

Each artifact discovered has a similar story, giving form to history. As we invent pathways out of our carbon past, the systems employed by Mr. Hires can prove a source of inspiration. 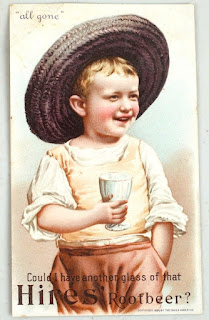 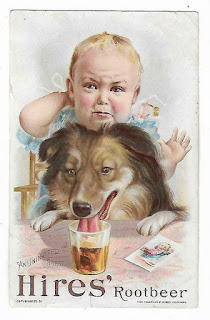 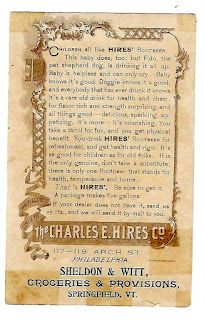 Schmidt, David
Hires and the root of root beer
http://lowermerionhistory.org/?page_id=339

Sourapas, Steve and Fowler, Ron
Hires to You, The Illustrated History of Hires Root Beer
http://hiresbook.com/

1. Rev.  Dr.  Russell Conwell,  the  founder  of  the Temple University, asked Charles Hires  to  help  him  develop  a beverage that might be sold among hard   drinking   Pennsylvania miners,  in  the  interest  of  the Temperance Movement.”
https://www.britannica.com/topic/temperance-movement

2. The Prohibition Party, 1888
Prohibition, as the extreme wing of the temperance movement, is one of the hallowed reforms from the 1840s. As the wave of state prohibition laws passed in the 1850s began to be repealed, prohibition agitators began to organize formally; the Prohibition Party founded in 1869 and the Woman's Christian Temperance Union of 1874 represented the two strategic approaches. When a second wave of state prohibition in the 1880s receded, both were superseded by the Anti-Saloon League, founded in 1893. Carry Nation yielding an axe comes to symbolize the smashing of alcohol, emergence of prohibition moment. 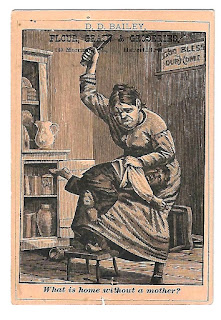 3. Much  of  Hires  early  advertising  was done  with  Victorian  Trade  Cards. These were artistic masterpieces, created by some of  the  most  talented  lithographers  and artists  of  the  time. The main period for Hires trade cards was from 1883 to 1910.

Posted by MBSarts at 1:09 PM No comments: