A lot of the bottles I’ve found are tiny. Some are perfume, but others have a most curious ambiance.

Prior to family doctors, health care or the DEA was the apothecary. These holistic Pharmacy's were generally the only option for those in pain. It’s wild to realize that historically speaking, our contemporary health care system is relatively new. But back in the day, the pharmacist was the only one in town to address medical needs from dentistry and eye care to surgeries and sickness. 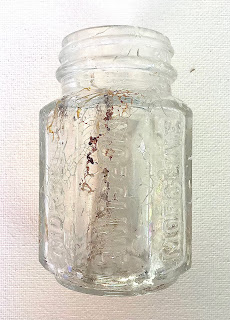 Old time prescriptions mixed up some curious concoctions. A blend of tradition, innovation and inebriation. Maybe you would like a swig of old Dr. Goulds Pin Worm Syrup? Stomach out of wack - try some 33% Alcohol “Homestead Tonic”.

All these tripping patients needed to know which “medicine” they were taking, so each container had a different shape, color and form. Labels included

“These medicinal compounds would have been distributed solely based on a doctor or pharmacist’s diagnosis and prescription. While the heyday of such proprietary druggist bottles existed between the 1870s and the 1920s, earlier examples certainly existed, and typically bore embossing featuring some combination of the name of the druggist, store, and location. Such bottles have also been termed pharmacy, drugstore, or prescription bottles.”

One of the largest collections of old apothecary bottles is in Tucson, AZ at the Coit Museum of Pharmacy & Health Sciences. It’s a hidden local curiosity that might just alter your. Interpretation of history.

It made me wonder if there was a neighborhood apothecary nearby. During the early history of our neighborhood, called Dunbar Spring, many worked in the mines, walking a few blocks to the railroad where trains would pick up workers. Some elders recalled the vendors selling lunch foods, fresh tortillas and drinks. I can imagine some tonics were available to ease a working person’s pains. Following World War 2 my house was inhabited by a vet, who perhaps used the various tonics to ease battle wounds. Who knows. The earth hides many clues, and mysteries. 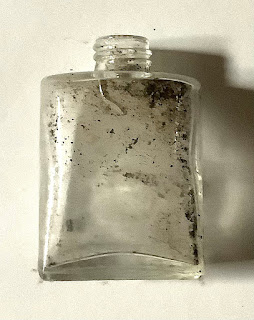 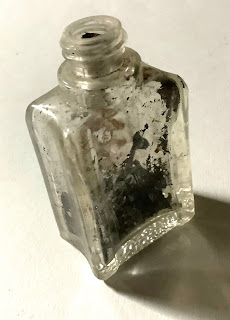 So as you're out there digging up treasures, beware those tiny tonic bottles and objects surrounding them. If you do find some cool bottles the Bottle Typing/Diagnostic Shapes blog may be able to help you.

Another great source are the The Federal Highway Administration (FHWA) and Pennsylvania Department of Transportation (PennDOT) who put together a cool site called Digging I-95 which documents many of the artifacts they are finding, including druggist bottles, their uses and history. This site is great and helped me identify a Methanol Inhaler Tube and syringe. 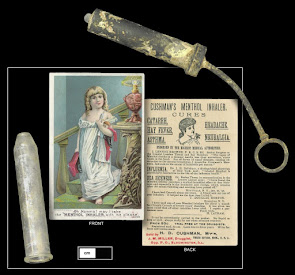