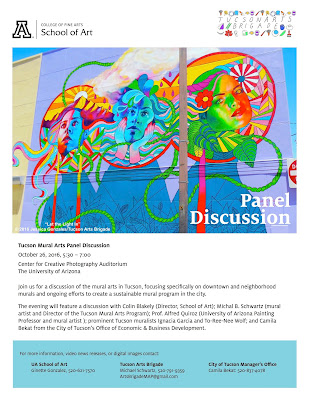 The University of Arizona School of Art is partnering with The Tucson Arts Brigade Mural Arts Program, to offer an exciting public event discussing the present and future state of public murals in Tucson.

Colin Blakely, Director and Professor, School of Art, and Michael B. Schwartz, Temple’s Tyler School of Art ‘88/UA MFA ‘91, Founder and Director of Tucson Arts Brigade and its Mural Program, will be inviting the greater arts community, students, faculty, the School of Art Board and the City of Tucson mural advocates for a panel discussion about the mural arts in Tucson, focusing specifically on the programs’ downtown murals and ongoing efforts to create a sustainable mural program in the city.

The panel takes place on October 26, 2016, 5:30 – 7:00, in the Center for Photography’s Auditorium on the U of A campus. The evening will feature a discussion with Blakely, Schwartz (formerly part of the City of Philadelphia’s Mural Program), Prof. Alfred Quiroz (mural artist of record on campus and in the studios); the City of Tucson’s prominent muralists which include Ignacia Garcia and To-Ree-Nee Wolf; and Camila Bekat, City of Tucson’s Office of Economic & Business Development.

The School of Art Advisory Board, in discussing a worldwide mural trend early last spring, quickly discovered Tucson Arts Brigade initiative to support the creation of murals in neighborhoods, schools and community centers.

The latest initiative led by the Tucson Arts Brigade and launched in May ‘16 resulted in eight murals in the downtown area and was funded by Tohono O’odham Nation with additional support from the City of Tucson. The Advisory Board subsequently connected Schwartz to Mr. Blakely, whose second year goals include expanding community outreach within the School of Art. “Tucson is a vibrant community for artists, and the university has an important role to play in recognizing and supporting that community. Works of public art like the Tucson Arts Brigade’s mural project remind us of art’s ability to impact our everyday lives in positive ways,” says Blakely.

The muralists will receive a modest honorarium from the UA School of Art while the panel discussion will provide important recognition for the launch of one of the Southwest region’s greatest mural development projects. “The mural program seeks to create an outdoor gallery that embraces local, national and international talent, creating paid opportunities for artists and promoting Tucson as a world class exotic destination.” says Schwartz.

Promoting these local and regional artists’ murals dovetails with Tucson being named UNESCO’s first top City in Gastronomy, also being ranked 7th Best Music City in USA, and all moving the spotlight onto Tucson as a relevant and ascending national center for the arts.