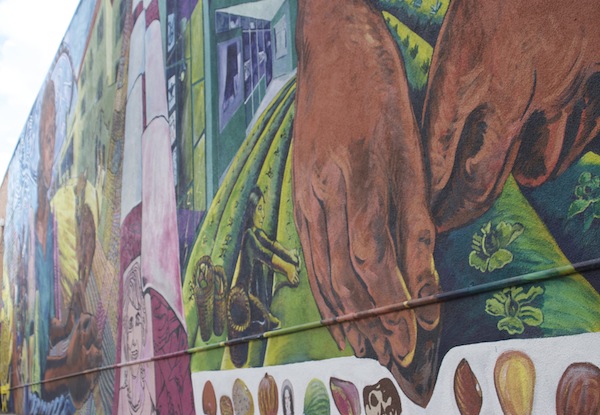 Posted by TMAP Admin at 2:31 AM No comments:

On September 9th, 2012, the members of Tucson Arts Brigade along with local volunteers gathered together at the 29th Street Overpass adjacent to the Jim and Vicky Click Boys and Girls Club for the annual Day of Arts Service, in remembrance of 9/11. 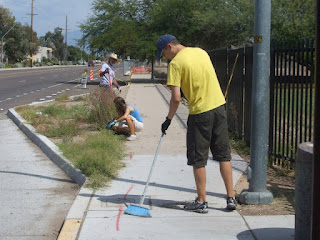 Between 1pm and 5pm, light landscaping, repainting, and an overall cleanup were done in the area surrounding the overpass. At the end of the day, participants gathered together to share their personal experience on 9/11. The different experiences and viewpoint’s on 9/11 were quite intriguing. 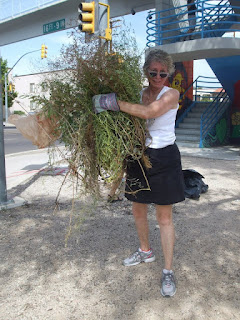 A majority of the adult volunteers spoke of family members that were closely involved, the experience of those family members, and what emotions they went through when they found out about the attack. The youth volunteers generally spoke about the effects of 9/11 that are apparent today from a younger generation’s perspective.

One issue that the entirety of the group made very clear is that, we need to not only recognize global tragedies, but everyday problems such as the homelessness in our cities all the way to tagging and gang violence. We all need to do our part and put in the work to become a thriving cooperative community. 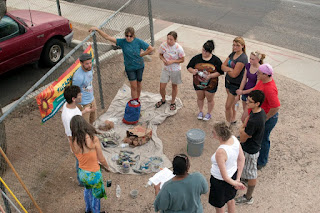 Victor Lopez is a Tucson Arts Brigade intern and is currently a senior at Amphi High School, Vice President of the school mural club, and helping TAB employ Community Cultural Development strategies in the Amphi Neighborhood.
Posted by TMAP Admin at 10:44 PM No comments:

From Thursday July 19 - to the wee hours of Sunday July 22 the Tucson Arts Brigade summer mural crew weathered a few storms and installed a series of six interlocked images. These designs were grotesques by request of the Slaughterhouse  in that the site is a popular local Haunted House. Painted in acrylic throughout the two days festival, these murals each represented an milestone in the careers of some of Tucson's most talented and ambitious young artists. The Artists Team included Aileen Boggs, Bryan De Los Reyas, Jacqi Garcia, Aria Pelayo, Juan Rey Rocha and team leader Michael Schwartz. This project was a collaboration with Digital Vibe Entertainment and a special Thanks to Alana Luna for setting this up! 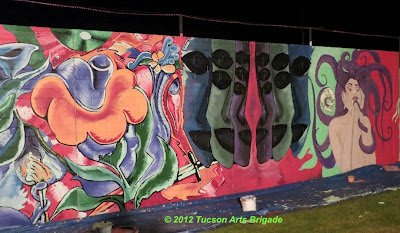 We are in the process of streamlining our many blogs, eliminating ones we don't need and attempting to make this material a little more easy to navigate and enjoy.

Note this project is on hold. Follow the links to find out about how you can get involved in other Community Arts programs.

The Archer Center Mural Site had only one posting on June 13, 2010 that read:

“This site will report on the Archer Neighborhood Center Mural project. This exciting after school mural project starts in September and includes;

Check back soon!
About Fred Archer

A flier was circulated and several youth responded to an question and answer session. After the presentation it was clear youth were excited about the project.

The Flier Read:
“ Do you like Painting and Drawing?

What: We will be collectively designing a mural for the lobby of the Archer Center. The mural team will go on to paint and install the mural after approval.”

"The project never did come to pass, but lessons were learned that have become invaluable as Tucson citizens weave a web of arts and culture that can stand the test of time. In reality we learned so much about the barriers and challenges to creating murals in our current economic and cultural climate."  - Excerpt from artists journal Sept. 2010

Blast from the Past TAB Spring 1999 Newsletter 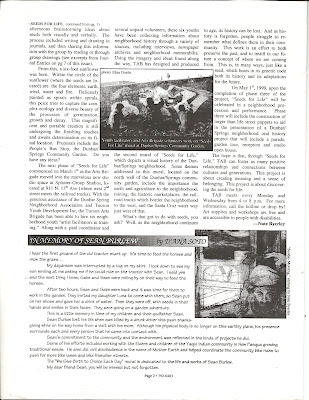 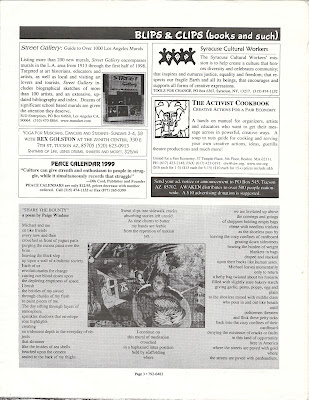 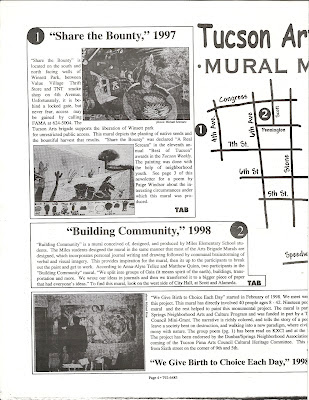 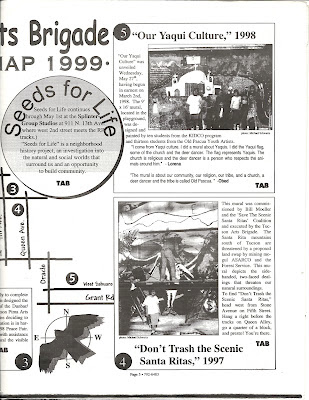 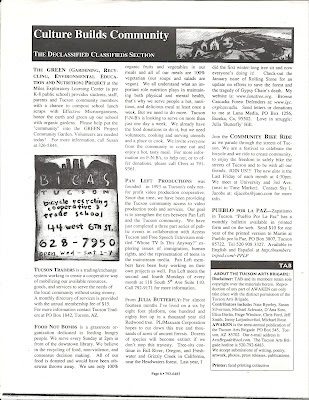 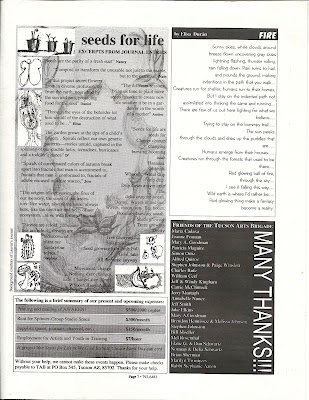 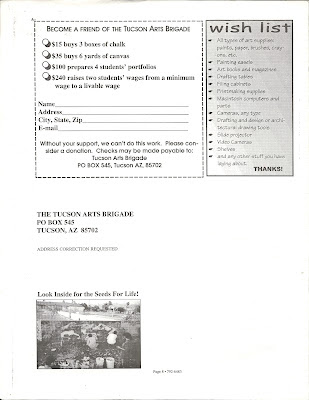 Posted by TMAP Admin at 2:59 AM No comments:


The National Education Association has been working with the Howenstine High Magnet School in Tucson , AZ, as part of their Priority SchoolsCampaign. Howenstine is a unique place with a concentration on experiential, hands on learning.  So we were delighted when the NEA came to visit a few months ago to check out our work in creating the Barrio Centro mural with students, neighbors and businesses surrounding the school.

The Arts Brigade is now in it’s second year of collaborating with the Barrio Centro Neighborhood and Howenstine.  We are already looking forward to our third year as we build new alliances with surrounding neighbors as part of our city-wide effort to Beautify and Unify Tucson.

Over the past four years TAB has developed exciting new arts programs in response to community defined needs of Jobs, Literacy, Environmental Issues and Beautification. In 2009 the Barrio Centro Neighborhood contacted TAB in their efforts to curb tagging and bring together their neighborhood for a fun interactive activity. The video produced by the NEA was a result of our first project together. There are currently plans underway for a series of murals in the area.

To find out more about the Tucson Arts Brigade, or how to request a project, visit our web site or Facebook page.
Posted by TMAP Admin at 8:59 PM 1 comment:

On Monday, January 16 from 1-4pm in Winsett Park, 316 N. 4th Ave. we were joined by dozens of people to paint and dialogue about the importance of Dr. Martin Luther King in our daily lives and work.

This was an opportunity for Tucson to honor Dr. King’s legacy through arts service. The MLK Day of
Service empowers individuals, strengthens communities, bridges barriers, creates solutions to social problems, and moves us closer to Dr. King’s vision of a beloved community. A Walk Up Art Station was present on site where the public shared stories, ideas and commented on our Together We Thrive Mural Project design for the site.


We are really excited because this spring we start actually painting the mural!

Here are some samples of the work created:


On January 7, as part of the BEYOND festival, TAB unveiled the proposed mural design for "Together We Thrive Mural". This was also a time to reflect and share ideas revolving around the January 8 tragedy.  Over 50 people stopped by throughout the day, including drummers from One Heartbeat. 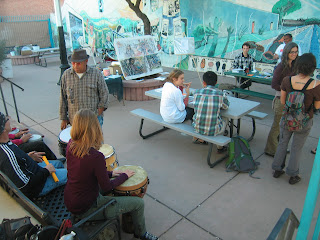 Next week join us for the Dr. Martin Luther King Day of Arts Service
Together We Thrive Mural Project: Community Input and Walk Up Art Station

This is an opportunity for Tucson to honor Dr. King’s legacy through arts service. The MLK Day of
Service empowers individuals, strengthens communities, bridges barriers, creates solutions to social problems, and moves us closer to Dr. King’s vision of a beloved community.

TAB will be hosting a Walk Up Art Station where the public can share stories, ideas, create water color reflections and comment on the proposed mural design.