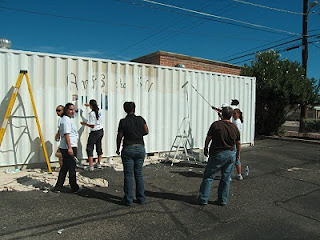 For the September 11 National Day of Service we prepared
the mural site at Arts for All.
That night we led the Play Area Sandbox at BatNight
I love this blog, mostly because I can share the story of TAB's 15 years of work in an open environment. Many of the murals we have created in Tucson over the years have been connected to a group or event. That is to say they are community initiated and involve dozens of people in every step of the process.
This fall we will be starting three new projects. We will be working with Arts for All, Barrio Centro Neighborhood Association and the 29th Street Coalition on designing and painting a series of four murals. We created blogs for Barrio Centro and the 29th Street projects. We are still awaiting the go ahead on the plans for the Archer Center mural. We expect that project to take place in 2011.
Also we are in the early stages of planning a mural about water to coincide with the annual Water Project Festival.
I have no idea what these murals will look like, that's part of the fun of this work. The people who live, learn, play and work in these areas will be doing the designing and painting.
The same is true for the two murals seen below. These projects were both done before digital cameras took over the world. I'll see if I can't dig up some better images.

About this mural:
Mural from the Commonfire Conference: Coming Together Across Borders and Issues for Economic, Environmental and Social Justice. This Participatory mural was created by over 75 participants during the five day conference in Tucson, AZ. The mural, on canvas, was then shipped to Canada. 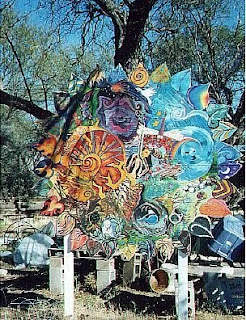 Seeds for Life
7’ x 7’ Acrylics on Wood
Where: Private Family Garden, Tucson, Arizona, USA
When: 1999
Artist Facilitator: Michael Schwartz
About this mural:
This project involved 26 people in an intergenerational 12 week project. The mural depicts the four directions, four elements (water, air, fire, earth) and the genetic diversity of the Sonoran Bioregion. We discussed gardening, seeds, rotations of life, the moon and much more.
More to come next month!
Posted by MBSarts Lab at 7:04 PM 1 comment: