From March 23rd to March 26th dozens of artists gathered in Ajo Arizona, the heart of the desert, to create over 50 beautiful murals in one weekend. Our feature artist this year was Harriet Wood aka Miss Hazzard from Barcelona who created a massive mural in homage to the desert.

This coming together of artists, diverse in culture, disciplines and practice - started on the intersection of three nations, the United States, the Tohono O'odham Nation and Mexico. The Ajo Street mural project started in 2015 as artists from throughout southern Arizona created murals of all sizes in the center of Ajo, AZ. The following year (2016) Ajo youth and artists came to Tucson for a Community Build Day event. In 2017 Tucson artists returned to Ajo for our third year of collaborations and mural painting on a large grange.


Ajo is in the Sonoran Desert, tucked away in Western Pima County in Arizona, about 120 miles southwest of Phoenix and 130 miles west of Tucson. Ajo is landlocked with the Tohono O'odham Nation to the east, Organ Pipe Cactus National Monument to the south, and the Cabeza Prieta National Wildlife Refuge and Goldwater Gunnery Range to the north and west. The Plaza, built in 1917, serves as a place of beauty and also the location of many community events such as the traditional 4th of July and Christmas Eve celebrations. The town has been economically depressed since the large open pit mine closed in the 80's following a strike for higher wages. When copper content levels fell, and as the mine grew in scale arsenic was used in the leeching process. The result was devastating. Today arsenic is found in the soil and water, illustrated by the number of rusting cars and equipment. This massive environmental challenge remains the elephant in the room. 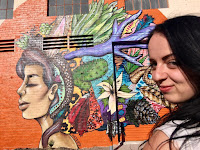 "The project is a framework for larger national and international
dialogue to promote socially engaged practice and community based arts. I believe street art enhances its own surroundings and provides an opportunity for public interaction and community conversation. This is not only an opportunity for renewal in connections within the community but a chance to forge and create stronger bonds between the town and its neighbors in Mexico." - Miss Hazzard

More weekend highlights included New Orleans based Mondo Bizarro and Art Spot Productions who provided musical and theatrical performance. Saturday night included a community potluck and art exhibition opening, complete with delicious after dinner treats at Art Under the Arches Gallery. That exhibit continues through May 1.


These murals have now become a landmark and destination for the tiny town as tourists from throughout the world get to see and enjoy over 50 murals painted by artists.  All the more reason to plan a trip to Ajo Arizona and perhaps at the beautiful Sonoran Desert Retreat Center, enjoy the murals, quiet days, fine people, food and scenery.


Funding for this project was made possible by the Puffin Foundation without whom this initiative would not have been possible. Additional support was provided by the Arts Foundation of Southern Arizona and the Tucson Arts Brigade! Thank You!

Additional Writings about the Festival: